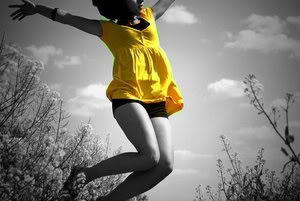 
See they always tell you to be and think positive, about everything whether good or bad. So for a long time it was hard for me to do the positive thing and I would wallow in self pity for days on end with absolutely no effort to pick myself up. Over the years though, I met people who have marveled me with their almost miraculous ability to bring themselves up even after life-changing things happen to them. While I was busy being there for them mopping and being sad, they were lifting their spirits and turning their misery around. In no time I was the one caught up in their past while they had long moved on (how ironical). In the recent past quite a number of things have gone awry (so much for being a staunch control freak) and in the process shook a lot of things I have based my faith and basically my whole life on. Normally when such things happen you kinda get depressed and become a loser or you take what life throws at you and make lemonade as they put it.

This time round, instead of slipping into depression I decided to try this positive approach/law of attraction thingy just to see if it works and prove them wrong, so I told myself. Truth is I was desperate for anything that would make it better and from my interaction with people I knew better than to allow myself to sink into the deep seas of misery. Let’s take a look at how it worked for me:

Were it not for the strike that my university had, I would not have been home for four months looking for attachment/internship, I would never have gone to the many firms I went to job hunting only for them to decline my request prompting me to seek work at this other org which I was sure would never have taken me in since it was a satellite office working on a new project that I knew absolutely nothing about. *breathe* As you may have gathered, after a few cancelled meetings I was able to get in-touch with some fellow from the office who felt his docket could use an assistant and that is how I landed my internship.

It later turned out that the guy who helped me get my internship did not do it in accordance to the laid down procedure and was thus at loggerheads with the overall boss leading to my state of uncertainty which also made me push my alleged supervisor to formalize my internship or else I would just quit (not like that would in anyway affect him but it felt good to let him know that I will not be used; not to say he wasn’t using me already). Him taking his sweet time to sort out the issue led me into doing some other application which led me to some office which I was later so grateful I went to, not that I got the job but I sort of scored in another area of my life that needed a little fixing so to speak, I have been single for the past two years! If that doesn’t qualify for/as chronic singlehood I don’t know what does!

I guess what I’m trying to say is; I ‘think’ I met a guy who is making me very happy! No details, besides the fact that we are taking it slow and that it feels really good to have someone I can talk to and who most importantly thinks I am funny. I might have not mentioned this before but I am very insecure about what people think about me, big problem if they think I am not funny! What good am I if I can’t make you laugh? My stint as the entertainment captain/comedian in high school is definitely to blame. Anyone who doesn’t laugh at my jokes is perceived as an unpleasant authority, courtesy of my dad who thinks my kind of funny is rather unfunny, oh well, he doesn’t know what he is missing. Whatever happened in his childhood to make him that way is beyond me.

Ps: I dug out this blog from my archived- offline blogs. It was dated, July 2009. 8 months down the line and he still laughs at my jokes, FYI.
Posted by soumei at 3:27 AM No comments: